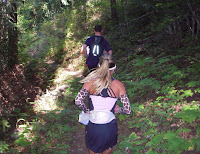 I've been trying to train better for the upcoming Spartathlon. Truth is, I know very little about how I should be training. I know only that I do not run enough miles, and I would be a better runner if I did. I have never limited my average weekly miles to 25 because I think that's all the training I need for running ultras. Rather, there is only so much time in a day and much of my time is taken by other responsibilities. So, attempting to increase mileage in the past has been difficult and sometimes impossible unless I were to sacrifice something else. Since most of my time is filled with work, my dogs (one of whom does not run with me), and other ordinary daily chores... and more recently, buying a new home and moving .... the only way I can find more time to run is to cut back on my sleep. Now, that wouldn't be all that bad a deal if it weren't for the fact that I am chronically sleep deprived to begin with.

I knew I had to train harder for the Spartathlon. Much of my Badwater training was spent in the sauna for the extreme heat conditions. While the Spartathlon weather gets up there too (in the 90's), the "extreme" that I must overcome there are the early cut-offs in the race. You see, I'm not a fast runner; I can just run slow for a long time with little decline in my pace. I never start with the front runners. I let them go and, as long as we don't run out of the course first, I can often catch up to at least the mid-packers, and even pass quite a few people if the course is long enough. That's just because I tend to be able to keep fairly steady through the miles.

BUT, at the Spartathlon, I must employ an entirely new strategy. I must run the first 1/3 of the race fairly quickly (for me) in order to exceed the cutoffs. Then, I guess I'll just hang on for as long as I can after that until the finish - I hope. I really hope I don't burn out this way. But it's gotta be done.

So, I've trained with more miles in the past 7 weeks (yep, that's all!). I moved easily from 25 mpw and tried to keep 60-70 mpw for about 4 weeks. I found I couldn't maintain it. I grew way fatigued -- not from the miles but because the only way I could get the miles in was to cut back on sleep, which was already chronically lacking. So after getting pretty beat up, I cut back to one 40 week and then hung out around 50 or so for the next couple of weeks.

This past week I put in much less than ideal miles (because I moved), yet I looked forward to this past Saturday's local Uncle Joe's 50k. My goals were 1) to not sprain my ankle on the trail, and 2) to run a medium-hard effort. I had no time goal in mind.

I felt strong from the start. The course is very hilly with about 5 early miles of fabulous soft single track trails followed by forest service roads with plenty of big and small rocks. I am pleased with my run there for several reasons: 1) I didn't injure myself (though my chronic hamstring tendinitis flared afterward as usual), 2) I felt strong on the uphills, 3) I really felt like I was moving much slower than I actually was; the effort was significantly less, and 4) I had lots of fun and experienced joy on the course the whole way. 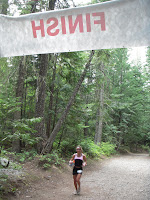 So, that's the training effect! Wow. Go figure. I didn't believe that I would actually get stronger. So, it seems humorous to me: you put in the miles, you
get stronger, the body adapts. :)

I do think I was overtraining for a while. But whether or not it was truly "overtraining" can be debated. It depends on how you define it. In the end, it really doesn't matter all that much. Truth is, sometimes we just have to cut back on the mileage in order to not burn out. There is only so much we can do, and how much we can get out of our training miles absolutely depends on how we are able to spend the remaining hours of the day. I love my job; I choose to do it well so I spend time at work. It can take a lot out of me, so much that I am too fatigued to run. But, that's my choice. I toyed with the limits of my weekly mileage and found the level I am able to do while keeping up with my life responsibilities. It's nice to have stretched and discovered where that balance lays.

Congrats to Dan and Francie on their wins. It was great to see so many friends, many of whom, like Tony P. and Van P., who have been running back to back ultras and marathons like maniacs!. Here are the results the race:

You have always run with the "big dogs". Just look at the runners names in the top 10. I'm guessing Salazar is one lucky dude that you can't get 50 miles in a week on average.

Have a great time participating in the Spartathlon. Go wow em!

I noticed in a previous post you mentioned that you were running with a torn plantar plate. I've been diagnosed with the same issue. How long did it last, and how long did you have to tape your toe for? Thanks a lot, I've been injured for a few weeks and it's good to find somebody who has had experience with that injury.

I'm amazed you were able to pull off 60-70 mpw for those 4 weeks with the limited amount of time you have already. Hope your sleeping better now that you've scaled back to your usual 25-28 mpw average.

Hi Eric, Thanks for the encouragement. I'm thinking no matter what the outcome, Sparta is going to be an experience of a lifetime. I WILL definitely try to sleep longer...starting tomorrow. :)
Great to see you at CCC.

Minnesota Runner, I actually started taping up my toe into flexion (like I pictured in my previous post) about a week or two before Umstead because it hurt even in my comfortable work shoes (esp if I had to like raise up onto my toes to reach something for example). I also wanted to let it heal as much as possible. I had trouble with it for about a month prior to learning the taping technique and seeing a podiatrist. I taped it for the race and didn't have much trouble at all. After the race, I seemed to recover quite easily, so I'd say, all in all, it gave me trouble for about 6-8 weeks. Nothing since then. Good luck with your plate too!

Hi Jon, I'm tapering to 40 mpw (mostly by necessity due to other commitments). Like I said to Eric, I'll start working on sleep tomorrow. :)

Best of luck with Spartathlon - you will do so well !

Dude(tte)! Is this, like, fastest female time on this course? Holy cow, Lisa! I were flying! may be I should start training next year too:) I'll be so-o thinking of you in Greece!!!

Lisa---awesome job! a fun way to get ready for Sparathlon. I'm really looking forward to being one of your crew members!

Hi Lisa,
You are amazing. Thanks for inspiration.
Your strategy and how you run, gave to me many ideas that have helped me in my runs. thanks very much
If you wants, you can.
When our soul told us what to do, the heart beat more stronger and the mind guides us towards which we want.
I will hope see you in Greece.
It is an honour for me to run next to people so special and have a chance to know my limits.
A great race to you.

Thanks!
Hugs from Brazil

Sorry for the english rs

Well GOOD News is you can go fast when needed so YOU will BE ready to meet those cut offs, Dang it!!!

Sweet Olga, the women's record on the course is held by Lori Barrato (sp?) who is a very fast marathoner. I think it was her first 50k. She finished in like 4:20 or something. Now, THAT's fast!

Allison - it's gonna be fun fun FUN fer sure!!

Hi Henrique! Thank you for posting here. Yes, I'll see you at the Spartathlon. Best of luck with the rest of your training/tapering for the race. I hope you have a great race! Go Brazil!

Thanks Struthie. You'll be missed, along with Steely, Zappa, Zuzu, and Missy while we're away. We'll be back, we promise!