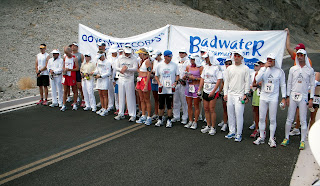 Ah! Another successful year at Badwater from a medical perspective. It was a "fast" year with many fine performances and a women's course record by Jamie Donaldson and a win by Jorge Pacheco. There were lots of races within the race too, like between Pam Reed and Dean Karnazes, making this one of the most exciting Badwaters ever.

The medical team consisted of doctors, nurses, EMTs, paramedics and exercise physiologists. We formally treated about 20 people, including a few crew members. The most popular reason was for dehydration and heat exhaustion, but there were other medical issues as well like nausea, vomiting, and an upper respiratory infection. 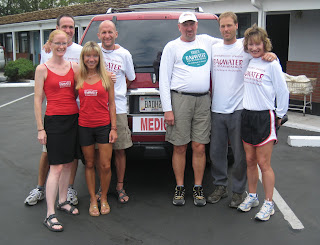 John Vonhof and Denise Jones tended to numerous foot problems, patching up runners and enabling them to finish there races.

It was a "slow" year for medical. We saw about 2/3 the usual number of patients. I attribute that to the cooler weather, like last year, 115 degrees F, but also to the high caliber athletes at this year's event. 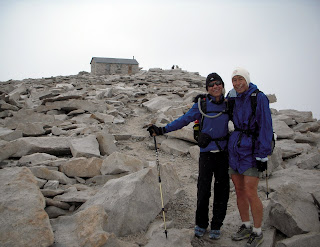 We had the privilege of having Dr. Brent Ruby and his colleagues from the University of Montana doing medical research on water turnover and core temperature at the race. These results should be very interesting! 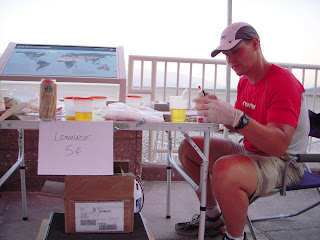 HERE are my pictures.

HERE are the full race results.

Danny Westergaard and Anita Fromm completed their double crossings!! Lisa Smith-Batchen completed her run from Las Vegas to Badwater, then to Mt. Whitney and its summit. In October she will ride the Furnace Creek 508 to complete her 810 miles for charity. 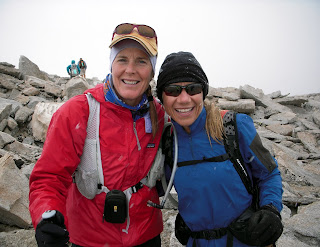 lisa...what a joy to see you on mt. whitney..gave me some energy as scared as we were of the storm that could have hit.
we are so blessed and honored to have accomplished what we did
love to you
lisa

Lisa - great seeing you out at Badwater. Thanks for all the work you and your team did although thankfully Kelvin and crew didn't need to use you but if we did we knew we'd be in great hands. Boy does this race inspire. Loved being out there for my second time. Cheers Ian

It was so great seeing you again! Thanks so much for all the encouragement! It was a dream come true and a lot of fun this year :)!

So THAT'S where you were! I should have known! *LOL*

I was glued in to the webcast at the end! Glad to know that the course WASN'T re-routed like they thought they'd have to do. Just isn't the same when the finish line doesn't end at the portal.

Lisa glad there was no major medical issues this year...good catching up with you last night.

Get some rest and then back to training for....

Hi everyone and thanks for the comments.

Rick - I'm not sure about Goggins. He was moving slower than usual but did not seek medical attention.

I'm so glad the course was opened in time for runners to get through. Caltrans deserves the kudos for this, and indirectly for enabling Jamie to set a course record and for Lisa to complete her summit. Still, had the course not been re-opened, we still would have had a great race. Runners were very generous in their understanding of the extreme and unexpected weather conditions that can happen in Death Valley.