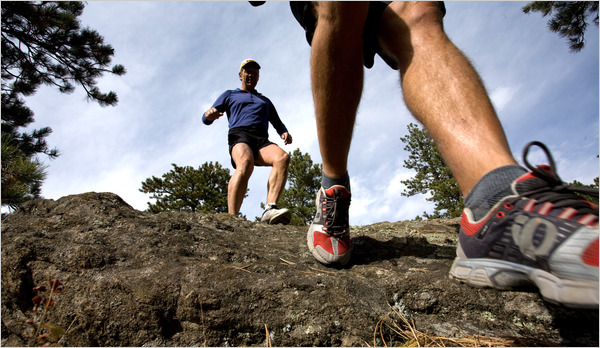 Marshall Ulrich, left, and Mark Macy, long-distance runners, have found that permanent removal of toenails helps them in races.

GETTING serious about a sport can mean doing the previously unthinkable. Swimmers shave their bodies sleek. Cyclists take blood-boosters. And ultramarathoners have their battered toenails surgically removed — for good.

Toenail removal is not for the faint of heart, but it can be a big relief to people who compete in 50- or 100-mile races. Even the most hardened ultramarathoners, for whom 26.2 miles is a warm-up, can be distressed by bleeding under a nail or a loose nail that bangs repeatedly against the front of a shoe.

“From my experience, it’s the hard-cores” who choose to go without toenails, said Dr. Paul R. Langer, a Minneapolis podiatrist who has been on the medical team for a 250-kilometer 7-day race through the Gobi Desert. “Even within the ultra community, less than 10 percent or maybe even 5 percent are permanently removing their toenails.”

The average marathoner suffers from plenty of black-and-blue nails, but doesn’t sign up to have acid poured onto a nail bed for permanent removal.

Ultramarathoners, who number more than 17,000 nationwide, according to UltraRunning magazine — “appear crazy sometimes, but they are great strategists,” said Dr. Robert M. Conenello, a sports podiatrist who tended to contestants of a multiday race in the Sahara. “A lot of them look at their toenails as useless appendages, remnants of claws from evolutionary times long ago. I’ve heard them say, ‘Toenails are dead weight.’ ”

The most utilitarian of ultramarathoners remove the offending toenails and keep problem-free ones. Then they sport a checkerboard look in sandals.

But the practice strikes some runners as overkill. “You know any sport has gone off the rails when you have to remove body parts to do it,” said Christopher McDougall, the author of a recent book about ultrarunning called “Born to Run.”

Ultramarathoners tend to keep quiet about toenail removal, Mr. McDougall said, because they “tired of being freaks, and they don’t want to add anything more freakish to their résumé.”

Marshall Ulrich of Idaho Springs, Colo., who had all his toenails surgically removed in 1992, has become a example for the practice. He used to stop mid-race to poke a hole in a throbbing nail to relieve pressure. Now, he said, toenails are “one less thing to have to deal with.”

(You might consider streamlining, too, if, like Mr. Ulrich, you ran the sweltering Badwater Ultramarathon without a crew supplying water and food. Instead he hauled his own supplies in a cart for all but 11 of 146 miles.)

Mark Macy, a fellow ultrarunner, used to tease Mr. Ulrich about his curious-looking toes. “It looks like he has a bunch of bald-headed little men at the end of his feet,” said Mr. Macy, a lawyer in Denver.

But about five years ago, some of Mr. Macy’s own toenails grew back mangled, and he decided that permanent removal made sense. He now has only two nails per foot. “You eliminate one source of constant aggravation,” he said.

Plenty of distance runners lose their toenails repeatedly. For some, it can be a badge of honor, proof of miles logged and the repetitive toe-banging they have endured. The proud wear hats and T-shirts emblazoned with the slogan “Toenails are for sissies.”

Some marathoners have their nails temporarily removed by a podiatrist if they are ingrown or dangling precariously. For them, the leap to permanent removal isn’t inconceivable.

Take Dr. Lisa Bliss, who won Badwater, the 135-mile race in Death Valley, in 2007, two years after having her two big toenails permanently removed. Previously, she had four times had a podiatrist cut away two misshapen nails that had grown back — painfully — into the nail bed instead of lying flat. So, she figured, why not just get rid of the nails?

Her online photo diary of the procedure — which is not for the squeamish — has become a forum for people who are trying to decide if the pain and weeks of recovery are worth it.

Dr. Bliss, from Spokane, Wash., still wears open-toed sandals and says that her nails “look better now than when they were black and blistered, and half falling off.”

The podiatrists interviewed for this article said that permanent toenail removal should be a last resort. Many blackened toenails can be solved by wearing shoes that aren’t too snug, or ones that accommodate the foot swelling that’s the norm with long distances, or by filing the nails flat on top.

However, advice for the average marathon runner who runs on pavement may be of little use to ultramarathoners, who run on trails and downhill slopes that jam their toes against the fronts of their shoes. “When you run that far and for that long, something is bound to happen,” said Dr. Jamie Yakel, a sports podiatrist in Denver.

Run enough 100-milers, go up and down enough mountains on manpower alone, and a full set of toenails starts to seem like a luxury. “Once you lose the nail once, it never adheres to the nail bed like it once did,” Dr. Langer said. “That’s why someone might be prone to the same nail getting beat up over and over.”

And, in some rare cases, toenails grow back even after surgery to do away with them. Mr. Macy’s big toenails started to return, and he got rid of them a second time. “Mine just keep coming,” he said ruefully.

Still, for some, the surgery is worth it. “It sounds bad, but it’s really not, because it solves all your problems,” said Roy Heger of Medina, Ohio, an ultramarathoner who had his big left toenail permanently removed to avoid mid-race patch-ups at medical tents.

Dr. Conenello, who once had a patient fly from Russia to his practice in Orangeburg, N.Y., for a permanent removal, said, “I’ve never had a patient have any regrets.”

Other runners rule out permanent removal. “My toenails are terrible,” said Tia Bodington, the editor of UltraRunning magazine, who recalled talking with a colleague, Lisa Henson, after the Western States 100-Mile Endurance Run. “I was going to get a pedicure, but I only had three toenails, and Lisa only had four,” Ms. Bodington said. “We had a great laugh about it.”

That does not mean she wants to part with her nails for good. “I personally cannot make that jump,” she said.

And here's the link to my "online photo diary." As you've already been warned, it's not for the faint of heart! So, don't go there if you don't want to see the pictures!

And here's a LINK to the above article in the New York Times.
Posted by Lisa B at 8:06 PM

What a thing to be famous for! This is great Lisa, I still think about that option now and then. Mostly as I am jamming needles under what remains of my nail. I am faint-hearted and looked at your photos once. Scared the toenails right offa me!

Michelle, I have wondered if this would help you. It only takes care of blistering under the toenail though. It's such a bummer you still struggle with this.

I must be a bit jaded because I think that removing one's toenails sounds very reasonable.

That said I will pass on viewing your on line journal of the experience.

You are my hero! I really want to do this. It didn't look too bad! You were smiling afterwards in the pictures! So how bad was it really???

I had them removed permanently only because I had to have them removed several times before that and the procedure was painful, expensive, and temporary.

Having the toe big toenails removed permanently was the best thing I did. No regrets. Painful procedure? Yes, but once the toe is numb, it's not so bad.

Right afterwards in the pictures, it was still numb. I went straight to a xmas party, and in about an hour, the novacaine wore off and it was exceedingly painful! I had to go home and it was a horrible night. I remember taking vicodin and icing and keeping my foot up in bed. The "burn" was throbbing. So, yes, it was painful. But, yes, in the end, worth it.

If I had to do it again, I'd nix the xmas party and take the pain pill before it got too bad!

Very reasonable indeed for some of us, Al. :)

After all that work we didn't get your picture into the Times after all :( The designer said it was a miscommunication in layout among other things.

I really did appreciate the extra effort though from you and Tim, and have put up your photos on my blog so at least they can see the light of day. Please feel free to use them on yours.

I didn't know how to email you, so I'll just post them here.

Thanks so much, Raj! The pictures came out very well. Hard work, yes, for all of us. But fun...and I got in a good post-Spartathlon work-out. :)

Thank you for giving the link to your work (which is excellent, BTW!) and also for letting me use the photos.

All the best to you.

Will be following your blog here.