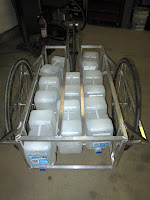 Somebody asked about how I will calculate my need for water for a 146-mile
self-contained crossing of Death Valley in July.

The answer is, I have no idea!

Ounces per hour or per mile won't work. My pace and work load will be
totally unlike racing the course with a crew. Instead of 30+ hrs, my time
in the relentless heat will be measured in days, probably 3-4 days. (It
took Marshall 77 hours and 46 mins.) And I will be pushing a heavy cart up
and down various grades. I have no experiences like this to help me
calculate specifically, and I don't think it is even really possible to do.

How much water do you use for dousing when running Badwater? Who knows? I have
never really thought about it while running the race; it was just always there for me. So, while I can guess, it is difficult, if not impossible, to calculate.

But I have done my homework. I spoke with Marshall Ulrich and Jeff Sauter,
the only 2 to have attempted this (Marshall the only one to have completed
it), and I am somewhat basing what I will carry on what worked and didn't
work for them.

Marshall had enough water to drink but not enough to douse with.
Jeff had enough for both.
They used different carts and water-carrying methods.
I require less water overall for rehydrating than either of them.
I might be out there longer.
I want enough to be able to douse somewhat freely.
I am nowhere near as physically strong as either of them for carrying weight.
Each 2.5G container of water weighs 20 pounds.
Water cannot be filtered on the mountain or resupplied at any time.
Water is life in the desert.
Running out of water is almost a sure DNF (unless I'm 1/2 way up the mountain).
Marshall's cart weighed about 225 lbs.
Jeff's weighed more than that.

In general, I am erring on the side of being prepared for anything, playing
it safe. The trade-off for that is the weight. But I am not going to leave
my warm summit clothes back in Badwater in the likely chance I will need
them on the mountain. So, no skimping for me on winter clothes, emergency
gear for the summit, and emergency supplies for the cart. I'm toting it all,
trying to cover all possible scenarios in the lightest possible fashion.
Similarly, I would be very nervous to skimp on the water. The best question
would be, how *little* water do I need for the crossing? But I don't know
the answer to that. Certainly, I'm not going to put myself at risk, and I
don't want to have to DNF because I wanted to do this *faster* with less
weight or something.

So, with all the general numbers and information in mind (really there are
no specific numbers) I'm thinking I should err on the side of a bit too much
water, but not so much that I can't push the cart. That would be around
eight 2.5G jugs. And maybe I will throw in one more just because I suck at
gambling? I haven't decided that yet. Nine 2.5G jugs = 180 pounds. And
that's just water weight! But, I can at least always douse with the extra
to get rid of it and lighten the load prior to the first major pass at mile 42.

Those are my thoughts and my preliminary plans. I will be experimenting
with the cart and water jugs here in the 50 degree weather that Spokane has
been offering for heat training. Not a fair simulation but it's the best I
can do. I'll make the best guesses I can and from there I'm just going to be
praying to the Death Valley gods to allow me safe passage.

No scientific method, no concrete calculations, and a lot of vaguely
educated guess work.
Posted by Lisa B at 11:51 PM

It all makes sense to me :) Looks like that cart came together pretty well for efficiency, err plus 1 as you are planning. Smiles for endorphins and belief will carry you through!!!

Hey Lisa - I helped a good buddy of mine gear up for a solo crossing of the Gobi Desert in Mongolia last year and had a similar issue with water and the cart. I am sure you have all the bugs worked out but if I can offer any advice I would be happy to lend a hand. I think what you are jumping in to is fantastic and wish you all the best! Matt Nelson - The Endurance Trust

And thank you, Matt. There are still bugs to work out. :)

Dr. Bliss,
My name is Sam McManis, reporter for the Sacramento Bee newspaper. I've written a series of stories over the past few months on the training of a local, first-time Badwater runner. I was hoping to secure a brief phone interview with you about the physicological issues at Badwater, as seen from your perspective both as a medical director and runner. My number is 916-321-1145. If you could spare a few minutes, I'd love to get your thoughts. Thanks! Sam

Lisa- We met at Glen's a couple of weekends back. I am not enough of a runner to really speak on this, but my gut sense says do everything you can to protect your knees. Trekking poles for pulling the cart up the grades? I hope you will have time to practice with your new cart. White clothing! It looks like you have the training, savvy, and (last but not least) the smile for this. Blessings. Rick Mannino

Sam, sure. If you give me your email I will send you my phone number and you can contact me whenever you want.

Thanks, Rick! I think you are most definitely enough of a runner because everything you say is spot on.

I will be using trekking poles for pulling the cart up the grades, practicing with the cart, pulling it up Mt. Spokane Road, and wearing light clothing! The attitude (smile) is the most important thing to remember. :)

Thank you so much.