It's always super fun to have an ultra in your backyard. The inaugural Centennial Trail Run was held this past Saturday, March 1st at 7 am. It was a 37-mile asphalt "trail" run from west Spokane to the Idaho border along the Spokane River. It was a low-keyed, sort of fat-ass style run. There were about 20 runners, no race numbers. For a $15 fee we got a Centennial Trail Map and a pretty nice finishers' medal.... at the start!

There was minimal aid along the course, some wonderful volunteers at a few point along the course with water and sometimes food. Steve Heaps had soup at his aid station, which was a great delight so late in the run. In any case, we were told to bring whatever we thought we might need. Of course, if you had a crew, it made your run easier. Some people did have crews, but most of us did not. I had the privilege of getting a ride to the start from Gunhild and Jack Swanson in their ultra crew van. Jack crewed Gunhild and was kind enough to be available to me if I needed anything. I didn't bring anything extra, so I didn't need anything extra. I did, however, drop off my Moeben Sleeves and some garbage with Jack, but that was it.

The first 10 miles were covered with ice-topped packed snow. It was very poor footing, and many of us fell... several times. We were forced to tip-toe a lot, and just when the path would clear of snow, we'd step down onto back ice, which was far more dangerous than the icy snow. I skidded out many times and fell good once. I wore my ankle brace, and it certainly helped spare my ankle during this long uneven terrain section. I don't think I could have done it without the brace.

It was 10 miles or so before we could really run. My knees and ankles and even hips were already sore from the slipping and sliding in the snow. I felt better though once able to run my normal pace. I ran with Alexis (the eventual women's winner), Karice, and Tim. Ali was running a quicker pace, Tim was tapering for Longview, and I was training for Umstead. Our paces were a bit different, and eventually, we divided up despite that Ali had scoped out the course and knew it well. Her boyfriend was crewing and she knew where to go (there were some detours on the streets because the Centennial Trail was impassible in some sections due to snow). So, when Ali scooted on ahead, it was just a matter of time before we lost the route. But adventures are fun, and this was one of the funnest parts of the run.

We had a map and we were never really lost. We knew exactly where we were in relation to downtown Spokane, where we could once again pick up the Centennial Trail, but we didn't know the exact course we were supposed to be on. Of course, there were no markings to follow. So, we ran in the direction we needed to go to get back on the trail. Too soon, we knew for sure that we were way off when we found ourselves running down the highway median on the north side of the Maple Street Bridge! It was quite humorous. And to optimize the adventure, we elected to run up the down ramp against traffic. I took my map and put it over my face and extended my flailing arms out in front of me. Other than some strange looks, we were the only ones laughing.

Once off the highway, this concerned lady came running up to us. She stopped us and asked where we were going and what we were doing. We thought she must've been from the race but as it turned out she was just an exceedingly concerned citizen who warned us that we should NEVER EVER walk dangerously up the ramp again. She pointed us in the direction of the trail, where we were already headed, and in no time, we were back along the river.

At that point, we decided a bathroom break was in order. As we passed through Gonzaga University, we found the School of Law and thought that would be a good place to go. Surprisingly, the Law School lobby was set up for a conference and there was coffee and an array of donuts. I asked if we could partake in this improptu "aid station" and the kind lady said yes. We hung there in the Law School for about 15 minutes before heading back to the trail.

We ran along into the Spokane Valley part of the trail, and at mile 18 (from the border), we met up with David Lygre and Mark Bodamer. They joined in a for a shorter long run, and with their fresh legs, we picked up the pace pretty much for the duration of the run. It was great running with the Ellensburg gang in Spokane.

The weather was originally predicted to be icy rain, wet snow and 30 mph winds. Instead, it was probably in the high 40's and sunny with a light breeze. Beautiful running weather. Gotta love them weathermen, eh?

We reached the Idaho border in 6 hours and 33 minutes. Ali ended up winning the women's race in 5:47. She is a very good runner. Late last fall, she won the women's race at Uncle Joe's 50k, her first ultra. I expect to see her around some more. She was a delight to run with.

Perhaps the funniest part of the run was the finish. We were so glad to be there, at the bridge over the River at the 00 mile mark on the WA-ID border. Woo hoo! We're done! .... and that was it. No fan fare, no applause, just personal satisfaction and relief. And then, we had to make the mile walk back on the trail to the car that we parked over night for the ride home. And just then, the weather turned cold and blustery and, as we walked into the wind, we got pretty chilled. We met up with Gunhild and Jack, and Gunhild said she finished in 6:55, quite a fabulous time once again. She is just so talented!

The runners emailed Ken Briggs, the RD, with their finish times. They are posted here. Many many THANKS to Ken and the generous volunteers for their time and smiles! 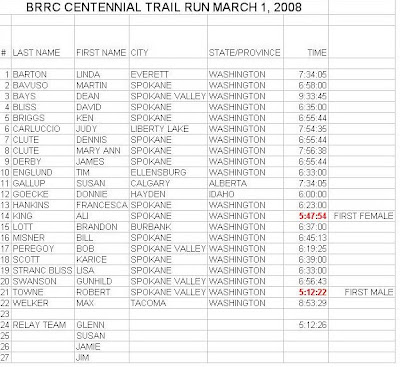 My recovery was easy. Unfortunately, I don't seem to get much, if any, training in during the work week, so I haven't run since then. These weekend long runs are about it for now. Not the best preparation for Umstead, but it's what I can do. I'll do what I can with what I've got.

Next up is Pacific Rim 24-hour where I will run just 50k. And after that, I taper.

Taper....what a funny word for me. I don't train enough to taper. I live in the taper!

That's my story of the Centennial Trail Run.

Stay tuned for my next retro-post about my R&R with Shannon Farar-Griefer a few weeks ago...
Posted by Lisa B at 7:45 AM

This sounds like fun...except for the asphalt part:) So, the slipping and falling - I hope it didn't trigger your ankle problem, did it? And what exactly are you tapering for?

Congrats on OP!
The ankle's good. Just strained my neck and elbow. Gawd, this ultrarunning is dangerous! :)
Umstead 100 is next 4/5.

Sounds like a load of fun. Glad to hear the ankle is good and I hope your neck and elbow are o.k.

Will you be at Badwater this year ? I haven't checked the roster yet. I'll be crewing for Jacki Florine.

Best of luck at Umstead !

What kind of brace are you wearing on your ankle? I've got a cranky ankle (been rolled too many times) and am looking for something to run in. Nice job in the snow and ice - tough conditions! I'm spoiled with mostly rain here in Seattle.

Lisa
I really enjoyed your race report. Loved the impromptu aid station at the School of Law!

Great pics of your dogs too.

Your race report post was included in this the Running Blog Carnival #2008-06.

Past copies are at kdays.com too.

Hi Tony: Excellent you are crewing at BW! See you there. I'm not running; working medical instead. Thanks for the Umstead luck. I'll need it.

Laura: The brace is an ASO (Ankle Stabilizing Orthosis). It is excellent. You can get it at www.zombierunner.com. Look in "Injury & Prevention."

Kerrin: Thanks for stopping by my blog and linking the Centennial Trail race report.

Can I please live in TAPER LAND toooooo

So let me get this right...You TAPER knock out 37 plus miles, FEEL GOOD the next day, TAPER again? then go knock out another long weekend...

ummm Wait BEFORE I commit to this TYPE of Training Methods, I would like for you to take some blood tests please & a urine sample :-)

Thanks Lisa - I've ordered my brace. Bring on the roots and rocks!

Lisa...you continue to inspire us all