Across the Years 48-hour Run

Well, I completed my first 48-hour run. My goal was 150 miles, and that's what I did. It was a fairly good race for me. Here's a brief summary of what I learned.

First, there were so many outstanding performances witnessed at ATY - Tracy,
Juli, Debbie, Alene, Scott, Hans, Tim, Tony, John...just to name some of the
top runners. They simply kept going and going and going. It was amazing!

Of course, Lynn Newton was inspirational as were SO many others. I will never
underestimate the power of a slow steady gait and simple relentless forward
motion.

It was quite a pleasure to have made many circles with Ray K and listen to
his stories. He even listened to a few of mine too. :) His journey of 200
miles was all impressive. He knew exactly what he had to do and how much
time he had to do it, and he never faltered (or if he did, I never saw it).
In case it hasn't been said, driving home cross country after his 72 hour
race is about as insane as it gets! I didn't even make it through the
airport without a sympathetic older woman asking me if she could help with
my bags.

I remain very impressed by everyone's determination and ability to dig deep
to find the next resurrection that got them back onto the course for more.

Here are my lessons in brief:

1) It gets c-c-c-cold in AZ at night. It's normally not this cold, but I was nevertheless prepared for bitter cold. In fact, I don't know how I could have prepared better. I had all the right gear, but after the first night, I just couldn't generate enough heat to stay warm. When my running was reduced to a shuffle and then a slow walk, I simply could not stay warm despite 6 layers of clothes including a down jacket. The first night was tolerable; the second night did me in. It was eventually the cold to which I succumbed. That and the exhaustion.

2) I didn't sleep enough. In fact, I didn't sleep and that was a big
mistake. I don't get tired at 24 hour races. Nevertheless, knowing I'd
have to rest for 48 hours, I forced myself to lay down around the 100 mile
mark. However, 10 minutes of laying down with my feet up only reminded my
of how much my feet and tendons hurt. I had to get up; I simply couldn't
sleep. Unfortunately, it was a mistake. I started falling asleep on the
course, leaning into the bushes on one side and walking smack damn into the
chain-linked fence on the other. (I was comforted that I wasn't the only
one doing this.) I tried again to sleep the next night, but just couldn't.
Next time (YEP, there absolutely WILL be a next time despite my grumblings
of "never again" on the course!), I will schedule in some longer breaks,
bring a tent, and wear ear plugs. Sleep will help me deal with the cold too.

3) My goal was 150 miles. My "training" was horrendous, almost non-existent
after taking several months off after Badwater. My non-running life has
been stressful. So, I started with something less than a full tank. I
could have pushed beyond my goal but, like Tracy mentioned, I didn't want to
risk permanent injury (I had a tibialis anterior tendinitis from mile 40
on), and I wanted to be able to recover from this race. I struggled
mightily with the decision of whether to stop at 150 or push on to 168, and
while I am disappointed that I didn't push, I am also happy that I am
recovering and will be able to resume some real training soon. It was the
right decision.

4) As the hours passed, it became increasingly difficult to make race
decisions, especially the second night. I couldn't decide what to wear, eat
or drink or even if I should go another loop. It never even crossed my mind
to take in caffeine to help stay awake despite that I had lots of that
available. Similarly, I neglected to take any of the four different kinds
of ginger that I had the Zombies deliver to the race when I became
nauseated. I should have been much more methodological in my planning. I
am eternally grateful to David Lygre who helped crew the latter part of the
second day. His support was invaluable. If not for him, I might still be
wandering around in a daze on the manor grounds.

5) This was one of the best directed races I have run. Paul Bonnett and the
numerous volunteers, including the ever present Dave Combs, were second to
none. And what a glorious New Year's celebration at midnight! There was no
place I would rather have been. Truly the best New Years celebration ever!

6) Receiving email messages was one of the most helpful perks of this race.
I can't thank my friends, family, and co-workers for all their support. It
constantly reminded me how blessed I am to have such wonderful people in my
life who, despite what they think about me running around in circles for
days, still support and encourage me.

7) It's difficult for me to rely on other people's help but I learned that a
little humility goes a long way. I took advantage of the medical tent and
got my ankle wrapped at mile 40. I couldn't have done the job myself.
Without Alan's medical help, my race would have been over. I also came to
rely on Phil Rosenstein's advice to help me stay awake and keep moving. He
and some of the other aid volunteers got me fueled up and moving again.
What a humble joy to receive help from someone who had to end his own race
due to injury.

8) While not a new lesson, I must add that the performances I witnessed at
ATY solidifies my contention that ultrarunners and their supporters are
determined, altruistic, supportive, fun, crazy people, and I love 'em!

Thank you, thank you to all ATY runners and volunteers, Paul Bonnett and Rodger Wrublik. It was for me the perfect way to start off the new year. And I think it's
going to be a good one!

Here are a few pictures: 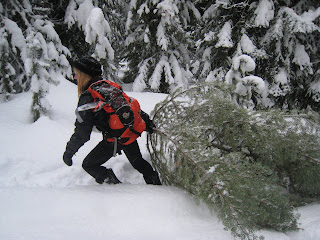 How I trained for the race. 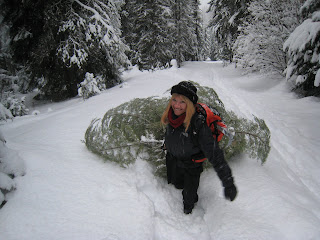 This is what we do in the Pacific Northwest instead of pulling around tires. 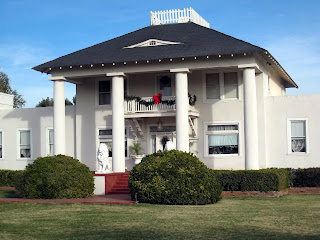 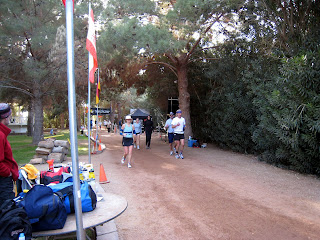 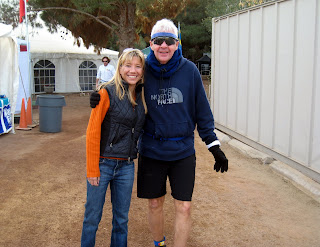 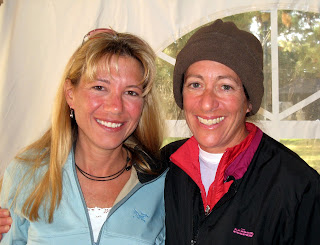 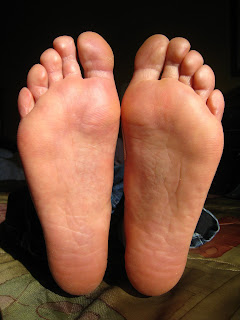 Look! NO BLISTERS! Thanks to my Drymax socks! Go HERE to learn more about these fabulous socks. 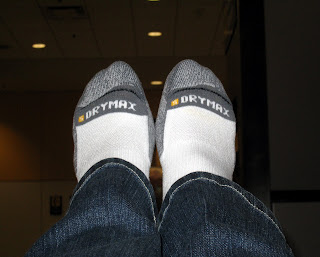 nice work, lisa! it was fun following how everyone was doing. i'm so glad you posted this because while following the races, the big unknowns were...how was everyone feeling, what was going through their minds, any problems/no problems, why did they stop early, how's their brain working/is it working???...and your post filled in all those blanks. congratulations and happy new year!!! : )

Thanks, Glenn. And thank you so much for all your emails that I got while on the course. The one that made me laugh the loudest was the one telling me not to let the satyr catch me! Haha! I burst into laughter and ran the next loop with a cheezy grin on my face. Most excellent! And also, thank you for the very cool holiday card. That one's going in a frame on my Badwater shelf. You're the best!
Happy New Year too.

Snow has been Hammering the west coast this year Be Safe!

It was a blast following u along and dropping u some notes...Looks like a great time and one that I will ADD to my Calendar.

Recover Well Hun, U did so Awesome!!

Awesome job at ATY, Lisa! It was so much fun to follow your progress send messages. I was really tempted to ask to use the computer at NYE party I was at so I could send you a message right at midnight!

Love the pic of you hauling the tree!

Lisa, you rock! I checked rsults as soon as I was back:) Congrats! And where did you get those socks from? Couldn't find a store 100 miles around:(

Happy New Year to one of the most energenic people I've ever had the good fortune to meet.

BTW - That cyclone fence face goes away after a while. I smacked into one years ago while playing frisbee and you can hardly tell now. ;-)

Olga, try Zappos.com for the socks. Hopefully, ZombieRunner.com will be stocking them soon too!

Recovery is coming along fine and fence face is fading!

your amazing at what you can do with NO training..maybe I should give your way a try:)

I just found your blog after you posted your comment on mine- this is awesome! Well done. I will be back to read more. I hope your recovery from ATY is going well.

Yay, you're back up where we can tune in -- you probably have been for awhile, sorry for my being out of the orbit -but anyway, you are amazing at what you can do on practically no training. You got that? Ay-may-zing!!! Wow. That's all I really have to say. Wow. And sorry I didn't post while you were running ATY. I was fighting some hip deep snow kind of like your Xmas tree pic! good to have ya back, kid!