Have bike, will ride

Now that Badwater is behind me, it's time to shift my focus to the Furnace Creek 508. Here's a description of the race from the website:

"AdventureCORPS, an event production firm specializing in ultra-endurance and extreme sports events, will host the Furnace Creek 508 Bicycle Race on October 6-8, 2007. Founded by John Marino in 1983 and known as "The Toughest 48 hours in Sport," it is the world's premier ultramarathon bicycle race. This 508-mile bicycle race is revered the world over for its epic mountain climbs, stark desert scenery, desolate roads, and its reputation as one of the toughest but most gratifying endurance challenges available, bar none. The course has a total elevation gain of over 35,000', crosses ten mountain passes, and stretches from Santa Clarita (just north of Los Angeles), across the Mojave Desert, through Death Valley, to Twenty Nine Palms. Solo, two-person relay, and four-person relay divisions are offered with a field limit of app. 200 racers."

I am part of a Badwater staff team of four riders. Despite wanting to do the race since I got into Badwater last February, and despite becoming part of this team a couple months ago, I had hardly given the race much thought. I couldn't; I had Badwater in my line of sight.

I figured I'd just get a bike after the race, and I'd have 2 months to train. It's only about 125 miles each, so I didn't think that'd be too hard.

The hard part was that I didn't have a bike! I never could decide on the bikes I was looking at earlier this year. I just didn't want to spend an enormous amount of money on a bike I knew I would "grow out of" in a season. I wanted a custom bike - with everything I wanted....but problem was, I didn't know what I wanted!

So, Badwater is over and the 508 is in my line of sight. I needed a bike. And just when I said I needed a bike, a friend's girlfriend needed to sell hers! It's a 2005 Trek 5000. We're similar in size and the bike fit and well, it was shipped to Fitness Fanatics here in Spokane on Friday.

I got fitted and purchased all the "necessities" like pedals and shoes and a helmet and tubes and the all-too-fashionable bike shorts with the extra padding. All for $960, and I hadn't even bought the bike yet!

Welcome to the sport of cycling!

(I reminded myself that it's a good thing I'm not an avid golfer as that can be even much more expensive.)

It was late when I got home, so my first ride was this morning. A friend showed me how to change a flat, get in and out of the pedals and - yep - even shift gears! This ain't no 3-speed yellow Schwinn like I had as a kid!

We went for a 10 mile ride. Much of it was slow and I practiced the pedals. I even knocked the chain off as I fumbled with shifting the gears. But after about 5 miles, I was feeling much more confident. I didn't even fall! (Yet, I know..)

Then, later in the afternoon, I headed out to the Centennial Trail and rode into Idaho and back, about 34 miles.

I had an absolute blast. Free...wind...meditative...speed...power...muscle.

But now the guys on the team are asking if Anna and I want to do the race ourselves as a 2-person team and have the guys crew. So, that would mean 254 miles each. 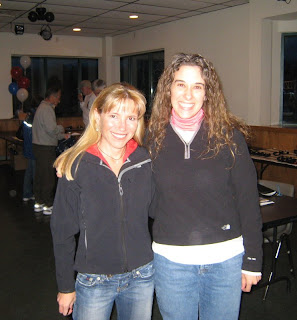 
PS - I did start a Badwater race report but I'm not sure I will complete it. I'll try. It's just I still don't have words. I have such strong emotions about the race, mostly about my fabulous crew and my friends who supported me, and I am just not sure if I be able to capture my experience in words. I'll keep trying though.
Posted by Lisa B at 11:03 PM

Lisa,
Belated congratulations for Badwater! Outstanding effort and a great run. As for bike riding, there is the Hot August Days 150 in Wenatchee next Saturday (August 18th). Not Badwater, but good hills and it wa 105 in the coulee's last year. I am dreadfully out of shape, not running at all, but will be there on my bike.

Is 254 the best you got? Come on kid. Your the 2007 Womens BW champ. Raise that bar. Let's see 508 solo! Training (and experience)is highly overrated.

Thanks, Kendall. I'll give this serious consideration. I'd probably do the 100 instead of the 150 though. I appreciate the lead!

Ok Lisa we will let you play with ur bicycle for a little while :-)

It was great talking with you a few days ago...Thanks!

They also have a 120 mile option which allows you to do a loop instead of an out and back. FYI.

Hope to see you there. KRK

And a new adventure begins:)

Lisa..I am so thrilled to see you and Anna will ride as a team at the 508!!! I adore Anna as much as you..look my butt really hurts:)
I have been on my bike 6 times since BW and the change over is hard but welcome. The cross training does work.
Love to you my friend
Lisa

The 508 team will be great with Anna. I just hope I don't slow her down too much!!