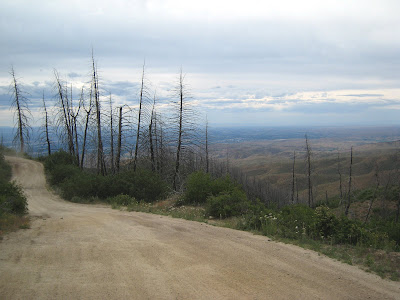 I ran the Shafer Butte Endurance Run in Boise, ID Saturday. It is roughly 52 miles, and is a low-key "club-style" or "fatass-style" race. The evening before the race, runners gathered around a picnic table in Fort Boise Park for the pre-race meeting, which was really just an informal gathering to collect runner names and pass out maps of the course. At 5 am the next morning, about 15 runners took off for the roughly 52 mile race. There was over 10,000 feet of climb with elevations between 2,800 and 7,500 feet. Fortunately for everyone else, but unfortunately for me, the weather was mild, in the 50's at the start and maybe reaching 80 later.

I ran early with Theresa Schut who was just running part of the course due to other commitments. I had a hard time keeping up with her, and as we climbed higher, with talking and running at the same time because I could feel the altitude. I ran later with Larry Varin and Tim Englund, and we stuck together for the remainder of the course. The front runners stayed in a pack for a long time, and we were the mid-pack, with some slower runners behind us, and a few scattered others who dared to venture down the trail by themselves. The concern was for getting lost, which we learned was fairy easy to do despite excellent instructions and a map from Frank Hanson, our Race Director. 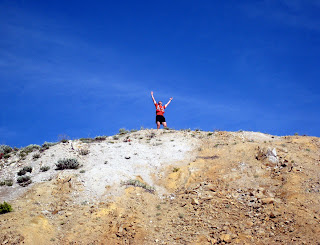 Our attitudes were casual and free. We took a few little "side adventures" to run up hills, gaze down into the valleys below, play in the snow, and to take pictures. 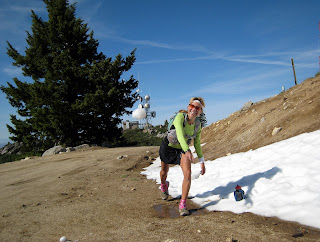 We had so much fun despite the thinner air (or maybe because of it!). 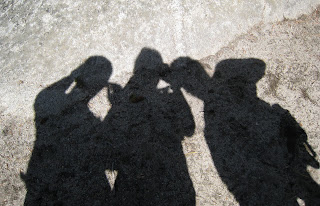 Each runner brought two gallons of water which was at our aid stations along the course. It was a nice surprise to see even more than that though. There were chips, gatorade, cookies, and beer. Theresa packed in some Frappachinos for us, which were worth their weight in gold at mile 33 (or so). We hit the turn around in a slow but satisfying 6.5 hours.

We missed a turn as we headed back and ended up giving the course some extra credit. We laughed and said we were there to get our money's worth from the no-fee, no-frills run. We spent another 10 minutes at the Mores Mountain Interpretive Trail Map deciding whether we should re-do the loop again, but correctly. We decided not to, which proved the right decision.

We continued on and Marilyn, Frank's sister, was still at the aid station assisting all the runners. What a dear! She loaded us up with fuel and fluids and caffeine, and the home stretch was much easier than the going out on the course because of the steep climbs, which were now descents. My ankle was grumbling, in fact, even from early on, but it wasn't getting worse, and I had no choice really but to continue. 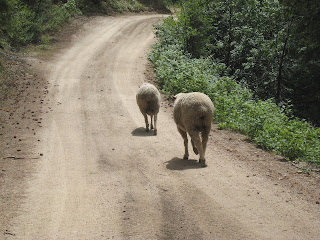 After Deer Point Junction, we caught some sheep on the trail that "paced" us for at least 3 miles down the trail. We then caught up to Karen Riddle, had a few laughs, and then made our way fairly easily through the home stretch to the finish line tree. Finish time was somewhere around 13.5 hours. Pretty slow, but really we were running! I don't care at all about time on the clock, only time on my feet and having a good (and injury-free) time. A few of us hung around the finish line tree for pizza and beer while waiting for Karen and Max to finish the course. 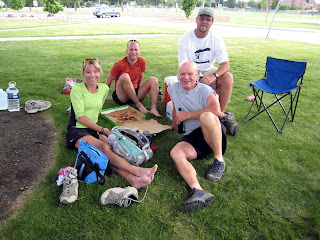 It was a wonderful run, and while there are so many more stories to tell, I will let the pictures fill in some more.

I can't thank Frank and Marilyn enough. There were other volunteers there too whose names elude me, but faces and smiles do not. Thank you too for the many ultrarunners who responded to my request for trail information - especially Paul Lindauer, Tom Noll, Theresa Schut, Karen Riddle, Larry Varin.

Here are some pictures.
Posted by Lisa B at 9:59 PM

Looks like a fun time Lisa. Too bad it wasn't really hot for you, but I'm sure the miles and the climbs were good training anyway.

What a great time, Lisa! Theresa is a sweetheart, a pure joy to be around. Glad you had an awesome fun time and good training, especially with sheep:) Way to go, dear!

Nice report Lisa. Sounds like you had fun which is wat it is all about. Ian

Lisa,
It was great to meet you and share the trails with you and Tim for awhile. I love the pictures :)
I wish I could have joined you all for the full day, but I made the right decision to keep it short.
I'll be out there next year too.
Wishing you the best for the remainder of your Badwater training.
Theresa

Thanks so much for your insightful and entertaining posts. Your information on Badwater will no doubt be of value to me as I join you in the quest for the finish line in July.

And please allow me to be the first to wish you a very happy birthday on 6/12. Welcome to the land of the 39'ers!

Thanks for everyone's comments and the bday wishes. The winning comment goes to Bob for wishing me a happy 29th birthday. :)

And welcome, Desert Fish Greg! Keep up the training for Badwater. You will LOVE that race (and maybe also hate it for a period of time... or two or three). Best of luck with your training, and I'll see you there!

...Now where was I in finishing up my work so I can LEAVE my office and get home???