Yesterday as I was driving to work, there was a young woman running on the sidewalk against traffic. At some point she obviously realized she had overdressed a bit as she had her winter coat tied around her waist revealing a thick sweatshirt. She wore headphones and carried her music source in her gloved hand. Her face told her story though. On it she wore the hugest smile as she ran in an almost skipping manner down the road. I couldn't help but smile too as I drove by. I've had runs like that.

Today, I drove to the school where I sometimes park and start my run. On my way, I passed a middle-aged man fast walking on the sidewalk against traffic. He wore jeans and loafers and was wildly pumping his arms to match his determined strides. He had an ear-to-ear closed-lipped grin on his face, which bobbed and rolled as he worked his body into a sweat. I couldn't help but smile too as I drove by. I've had work outs like that too.

Then, as I ran up Big Rock Road, which ascends out of the valley and goes up and up the face of the hill, I saw 5 young boys, maybe around 7 or 8 years old. They were running at uncontrollable top speed from the house down into the field. I could hear their laughter. Their unzipped coats were parachuting in the wind and their arms were flailing all around as they picked up momentum down the hill. Four boys ran ahead and the fifth one, who was smaller and apparently younger, was more cautious in his footing. He fell behind and started yelling, "Hey, wait for me!" I couldn't help but smile, especially since I've had many runs like boy #5 in recent months too.

The valley receded below as the road carried me up the hill. I ran to the end of Big Rock Road, which dead ends at the trail that goes up the mountain. I thought perhaps I'd venture out on the trail but what I saw quickly changed my mind: http://www.pbase.com/lbliss/image/70414227. The sign warned me I'd better turn around, which I did. This was someone I did NOT want to meet! Still, I had to smile and take a picture. I've had days when I've felt like that too. 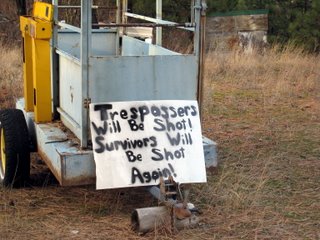 Hope you've experienced some stranger kinship today.
Posted by Lisa B at 11:50 PM No comments: